Facebook’s plan to take on Musical.ly may involve more than just its own take on a lip syncing feature.

They’re also working on “Talent Show,” which would allow users to compete by singing songs then submitting their audition.

The feature isn’t live, but was rather an uncover in the Facebook’s code by Jane Wong.

Wong has a history of uncovering yet-to-launch features or those still in testing through the use of reverse engineering tactics.

In the case of “Talent Show,” Wong discovers an interface that allows users to pick songs, and then start recording themselves singing the track.

The app’s code also makes references to the feature as “Talent Show” and includes mentions of elements like “audition” and “stage.” The auditions load as videos, Wong notes.

How Is Facebook Benefiting From The Talent Show Feature?!

The development would offer Facebook another way to take advantage of its more recently acquired music licensing rights.

The company, starting last year, began forging deals with all the record labels – including the majors like Universal, Sony, and Warner, and several others, as well as the indies.

The deals mean Facebook won’t have to take down users’ videos with copyrighted music playing in the background, for starters. But the company also said it planned to leverage its rights to develop new “music-based” products going forward.

One of those is Lip Sync Live, an almost direct copy of the popular tween-and-teen lip syncing app Musical.ly, which today has 200+ million registered users and 60 million actives.

Like Musical.ly, Lip Sync Live – which is still in testing – a way to broadcast your lip sync recordings to friends.

Talent Show (assuming the code analysis is on point) seems to take a different angle.

Instead of lip syncing for fun, people are actually singing and competing. It’s similar to the newly launched app FameGame.

However, Wong notes that the feature may be restricted to Facebook Pages, similar to Facebook’s new trivia game show feature.

So, it may offer those partners who’re using Facebook to build out games on their own pages.

Over the years, Facebook has taken aim at any other social app that gathers a following and then reproduces its own version of the app’s key draw – as it did with Stories, Snapchat’s biggest differentiator.

It’s no surprise, then, that it now has Musical.ly in its sights, with regard to lip syncing.

And with the Talent Show feature, it may challenge YouTube as the place where new talent can be discovered, too.

In what could be the biggest one-day drop of all time, Facebook shares opened at $174.89, down 19.6 percent compared to yesterday’s closing price of $217.50 according to NASDAQ:FB.

Now, today’s performance isn’t due to yet another data misuse or election interfering scandal.

The company has reported disappointing earnings. For the first time, Facebook’s growth is stalling.

There are barely more people checking Facebook every day compared to previous quarter.

Facebook is still growing, however, it’s clear that GDPR combined with a saturated market isn’t helping the company by any means.

This is why Facebook is trying to change the narrative.

For example, for the first time ever, Facebook shared a new “family of apps audience” metric.

There are 2.5 billion people using at least one of the company’s app — Facebook, Instagram, Messenger and WhatsApp.

But this is going to be bring some questions to life in then next few months as it’s unclear if Instagram can generate as much money as Facebook’s main app. 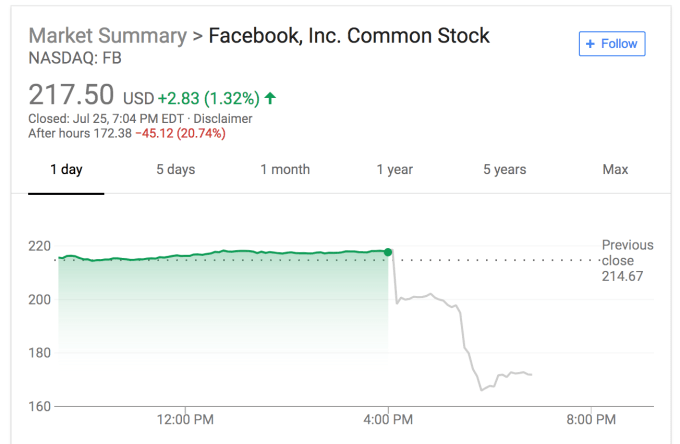 $123,400,000,000 is a big number. It’s hard to wrap the mind around how much this kind of money represents given the scale of these massive companies. As TechCrunch’s Jon Russell pointed out, bitcoin’s entire market capitalization is currently $141 billion. So it’s like nearly all bitcoins disappeared overnight.

Who would have thought Facebook could be more of substance than bitcoin?

Even if you compare it to significant tech companies, this is a huge loss.

For instance, Netflix is worth $158 billion right now. Twitter’s market cap is only $33 billion.

It’s like Facebook did away with nearly 4 Twitters in market cap overnight. And I’m not even talking about Snap, which is only worth $17 billion.

Most people have been focused on Facebook’s losses for now. But now it’s time to look at Facebook’s business model and understand what’s causing this these losses to happen.

Facebook is one of those once-in-a-lifetime, incredible success stories.

It did become a massive business in just a few years, but it also has a dangerous business model.

Thousands of employees are looking for ways to collect more data. Business teams can then sell expensive ads because they’re perfectly targeted.

And the best way to optimize efficient ads is by making addictive products that consumers feel like they need.

If you spend more time looking at stories, you’re going to be exposed to more ads. Period.

People will look back at this moment as an inflection point in the company’s trajectory. But it’s still unclear if Facebook has the answer to its structural issues.

When Tinder first launched in September of 2012, it started out as just a “swipe left or right.” Swiping left means you don’t think someone is appealing and swiping right means you do.

This changed the game, especially for those that may be shy or not confident enough to approach someone in public.

Over time, there have been other dating sites that have tried to compete with Tinder. Some of which are Bumble, the app that only allows the woman to make the first move, Zoosk and eHarmony.

The simplicity using Tinder, however, has been the reason that it’s been the more dominant dating site.

I mean, come on… it’s so easy to just swipe left or right whether you think someone’s “hot or not.”

Tinder Is Amplifying Their Swipe Game!

You know that verse in Miley Cyrus’ song, “We Can’t Stop” that goes, “We can’t stop, and we won’t stop”? Well, that’s exactly what dating app giant, Tinder, is doing right now with their newest feature, Tinder Loops.

And now with Tinder, we’ve got a new experience that’s really going to amplify someone’s swipe game. Tinder’s new two-second Loops, where you can take any video and create a loop from it.

Tinder has already tested Loops in countries like Canada and Sweden, but now they have added a few new markets.

Tinder also increased the number of images users can upload to nine, in order to make room for Loops without displacing original photos.

Given that Tinder has been testing Loops since April, they now have more data around how it’s been working for users.

For example, users who add a Loop to their profile saw that their average conversation length went up by 20%.

This new feature has also seemed to be very beneficial in Japan, which was launched there in June – certain users say they receive an average of 10% more right swipes if they have a Loop in their profile.

In the era of Instagram and Tinder, users have used pictures to represent themselves online.

But, with all the editing tools available, it also means those pictures aren’t always the most accurate display of personality or appearance.

So with Tinder Loops, these videos help give a new way for people to get to know the real, authentic person they’re chatting with.

The ride-sharing company, Lyft, has announced that they are offering free rides for cancer patients in more U.S cities.

Lyft has been offering this free service for just over a year exclusively in Miami and Las Vegas. Now they are expanding to more major U.S cities such as Houston, Los Angeles, St. Louis, Philadelphia, Cincinnati, Denver, and Atlanta.

Lyft’s free rides for cancer patients will include ride-share to AND from their treatments!

Lyft is executing these free rides with the help from their new partnership with the American Cancer Society; known as the “Road to Recovery.”

Patients seeking free rides can coordinate with the American Cancer Society by calling 800-227-2345 or visiting www.cancer.org. The ACS, which covers the cost of the rides, will then use the Lyft Concierge service to arrange a ride. (NOTE: These are volunteer Lyft drivers; therefore, they VOLUNTEER to drive these patients for FREE through the Road to Recovery website HERE).

Patients merely need to schedule their trip 4-7 days in advance of their treatment. As Lyft clarifies, this free serviceis for cancer-related treatments only.

The Road to Recovery is going to be very beneficial for patients; especially for those who live in areas where walking, biking, or other forms of transportation may not be an option.

“The best treatment in the world can’t help someone if they can’t access it,” said Megan Wessel, a vice president at ACS. “Access to care is a big problem in our country, therefore transportation programs and partnerships like the one we are launching with Lyft in Miami-Dade County are vital for these patients.”

Hopefully, with the Road to Recovery, these patients will have easy access to the treatments they truly need and deserve.

This website uses cookies so that we can provide you with the best user experience possible. Cookie information is stored in your browser and performs functions such as recognising you when you return to our website and helping our team to understand which sections of the website you find most interesting and useful.

Strictly Necessary Cookie should be enabled at all times so that we can save your preferences for cookie settings.

If you disable this cookie, we will not be able to save your preferences. This means that every time you visit this website you will need to enable or disable cookies again.

Cookies are small pieces of data, stored in text files, that are stored on your computer or other device when websites are loaded in a browser. They are widely used to “remember” you and your preferences, either for a single visit (through a “session cookie”) or for multiple repeat visits (using a “persistent cookie”). They ensure a consistent and efficient experience for visitors, and perform essential functions such as allowing users to register and remain logged in. Cookies may be set by the site that you are visiting (known as “first party cookies”), or by third parties, such as those who serve content or provide advertising or analytics services on the website (“third party cookies”).

Both websites and HTML emails may also contain other tracking technologies such as “web beacons” or “pixels.” These are typically small transparent images that provide us with statistics, for similar purposes as cookies. They are often used in conjunction with cookies, though they are not stored on your computer in the same way. As a result, if you disable cookies, web beacons may still load, but their functionality will be restricted.

We use cookies for a number of different purposes. Some cookies are necessary for technical reasons; some enable a personalized experience for both visitors and registered users; and some allow the display of advertising from selected third party networks. Some of these cookies may be set when a page is loaded, or when a visitor takes a particular action (clicking the “like” or “follow” button on a post, for example).

Many of the cookies we use are only set if you are a registered WordPress.com user (so you don’t have to log in every time, for example), while others are set whenever you visit one of our websites, irrespective of whether you have an account.

For more information on the choices you have about the cookies we use, please see the Controlling Cookies section below.